Searching for “Used Honda Cars For Sale Phoenix” or used Honda dealerships? In-Power Motors LLC has you covered with quality used Honda cars and best used car buying experience in Phoenix, Arizona. Our used car lot sees a lot of Honda’s pass through our lot every year, which includes the Honda CR-Z, Fit, Civic, Accord, and more. We are constantly buying, selling, and trading for used cars. Stopping by our lot is one of the best ways to check for the used Honda car you are searching for. If you are searching for a specific model of Honda car, give us a call at 1-602-648-5275 or Stop by In-Power Motors LLC at 2301 West Buckeye Road Phoenix, Arizona 85009 today. We have a huge list of 500 down (O.A.C. – On Approved Credit) used cars for sale.

Honda started the first Japanese car company that opened up a plant in the United States. Honda has been a part of American life for a long time now. American’s have grown to love used Honda cars like the Honda Accord and Civic due to their reliability and durability to last many years. 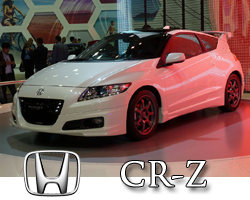 The Honda CR-Z began selling cars in North America around 2010 with the 2011 CR-Z model. It originally offered 3 standard trim levels that included the base model of the CR-Z, the EX and the EX with navigation. Production started in 2010 and run until 2016 offering a great compact sport hybrid electric vehicle. It featured a hybrid gasoline and electric powertrain engine which coupled to a 6 speed transmission.

The CR-Z is regarded by many as the successor to the 2nd generation of the Honda CR-X when considering the exterior design look and model name. The CR-Z is one of the most environmentally friendly vehicles for sale in the United States and was rated as an Advanced Technology Partial Zero Emissions Vehicle. Used Honda CR-Z’s are great used cars and sure to last. 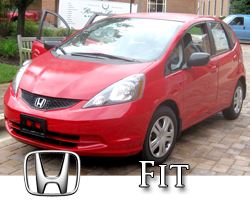 The Honda Fit started production back in 2001 in Japan, and was introduced to America in 2006 as the “2007 Honda Fit”.  The Fit is a front engine, 5 door hatchback, subcompact, front wheel drive car which is currently in its 3rd generation of production. Fit’s also keep with safety initiatives and provide side curtain airbags, standard side airbags, power windows, ABS, and front airbags (mandatory).

One of the most distinguishing features of the Honda Fit is it’s ability to re-configure the cargo space to fit larger amounts of cargo, or passengers as needs change. That gives the Fit the ability to compete with larger cars that typically do not have the ability to change the seating configuration or allow bulky items to be hauled. For North America, the Fit features large bumpers for additional safety. The Fit has two models in production for the United States, the Base and the Sport, giving car buyers the flexibility of choosing low monthly payments or opting for greater comfort and styling. Used Honda Fit’s are reliable vehicles. 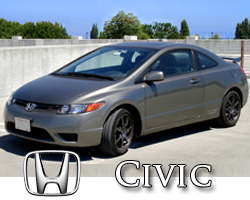 The Honda Civic is one of the most recognizable cars on the road, and of the Honda brands. The Honda Civic started sales in 1972 and has held a strong ever since by offering quality and affordable cars since its inception. Now in its 10th generation, the Civic is sold in many different models such as the Sedan, Coupe, Hatchback, and Performance Models like the Type R and Si. Used Honda Civic cars retain a lot of their resale value due to the quality these cars are built with.

Civics are available in a variety of different trim package,s yet even the base model comes with power windows, LATCH, theft-deterrent system, daytime running lights, 15 inch steel wheels with covers, driver height adjustment, and other features. Additional equipment on the other trim levels includes sunroofs, alloy wheels, sound system upgrades and much more.

For many used car buyers, the Civic Hatchback is the perfect option aggressive styling and cargo carrying. Whether it is a trip for transporting your audio equipment to a performance or a quick trip to the grocery store, the Civic Hatchback gives you the room to get the task done.

The Honda Accord got its start in 1976. I has since been one of the top selling vehicles in the United States since 1989. The name “Accord” has been used by Honda on many of their wagons, crossovers, coupes, and hatchbacks all over the world and has certainly become a household name. The Accord holds the record of being the first Japanese vehicle brand that was produced domestically, starting in 1982.

The Accord also enjoys the award of Car & Driver’s 10 Best list 30 times! The Honda Accord is known for being one of the most reliable vehicles and recent editions are available as hatchbacks, sedans, and two door coupes. The Accord features a variety engine configurations including 2 4-cylinder options that produce 177 hp or 190 hp for (Lx or Se trim levels), and a larger V6 engine option which is rated at 272 hp.

The accord is also for sale with hatchback convenience options which gives car buyers the ability to choose from the roomy interior of a full-size vehicle and having the ability to fit larger items in the back. If you have larger equipment that you need to haul or you simply just want room for your camping gear, the hatchback offers convenience and comfort.

Stop By Our Used Honda Car Dealership in Phoenix